From the “Now I’ve Heard Everything” side of life, I found the following in my Facebook feed about a mortician who is using social media.  I think this can handily remain one of my arguments about whether a business has a use for social media because if this guy can cultivate a Twitter following that exceeds the size of the town he  works in (by nearly threefold), surely those with a more uplifting business can probably leverage the free forms of internet marketing to their advantage.  Actually, a general Google search on morticians and social media uncovered (unearthed?) a few others who are using social media.

Smartphones in the Coffin

Some time ago, there were stories about loved ones being laid to rest with cell phones inside their coffins, turned on, so that the surviving bereaved felt some measure of comfort at having the option to call the deceased and feel like they could have a conversation with them.  Imagine the shock horror of people strolling in a cemetery and discovering they had a musical soundtrack to accompany them!  Could we next find iPhones buried with the departed so an odd Twitter tweet may be submitted or a game of Angry Birds can continue?  You may be waiting a long time for a counter move on Words with Friends…  But one thing the Twitter generation of morticians can say is, during a funeral just leave the smartphones off and forget about selfies with the body. 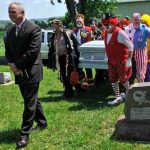 Talk about your scary clowns

So much of what is in demand in business today is to give the customer a personal level of service, even if it means thinking outside the, ahem, box.  Businesses that adopt some form of social media can enhance what they do for an individual when meeting face to face by sending them birthday wishes via Facebook, advertise special discounts or services for Twitter followers, and above all, become more and more transparent to your customers, both present and future.  I just recently learned about this after attending a workshop and found that putting my personal photo on my Twitter account, my Google+ account and Facebook account for Your Virtual Sherpa, really did create an uptick in interest in my business.  Each time I post something, more interest is generated.  If I get people interested, I have created a growing market of potential clients.  And a group of clowns might like to know that the funeral director is willing to allow their buddy to be borne to his or her final resting place by those who shared the clown life.

Well, frankly if you are relying on the Yellow Pages or a one-shot deal on a website that never changes (not even updating the copyright statement at the bottom), you may as well be dead for many customers.  First of all, the indexing technology of the internet will begin to ignore you and you drop in relevance to searches for your type of business.  But even if that didn’t seem to matter to you, think on the fact that when there is no sign of any new information about your company or your service, people may question the very idea that you are still in business.  And this is no economy for one to play possum.